Do you have a project we can help with?

SIFCO INDUSTRIES, A LEADING SUPPLIER OF FORGED COMPONENTS
TO THE AEROSPACE, ENERGY AND DEFENSE MARKETS

SIFCO Industries is a world-wide provider of highly engineered forged components to the Aerospace, Energy and Defense markets. We supply flight-critical forged components and machined assemblies to all of the leading aircraft and engine manufacturers in the world. These components can be found on virtually all of the commercial and military fixed-wing aircraft as well as helicopters and business jets. Our products are also supplied to the leading steam and gas turbine manufacturers and oil producers serving the energy sector.

AIRFOILS FOR
ENGINES AND IGTs

SIFCO is a global producer of open and closed die forgings. We forge aluminum and hard metal components. Our services include providing machining and assemblies for numerous Boeing programs.

SIFCO believes its goal of “Good parts on time” helped SIFCO attain its place in the program.

We join approximately 100 suppliers that have met and/or sustained the high quality and delivery criteria required for inclusion in the Premier Bidder Program.

Cleveland Ohio, December 10, 2019 – SIFCO INDUSTRIES, INC. is pleased to announce that SIFCO Forge has received the 2019 Curtiss-Wright Excellence Award. The Curtiss-Wright Company issues the award annually to recognize suppliers who have achieved the quality targets. 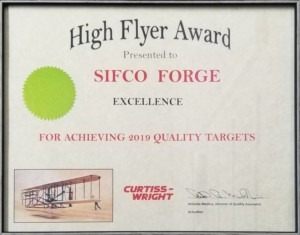 Cleveland Ohio, July 17, 2019 – SIFCO INDUSTRIES, INC. is pleased to announce that it has received the 2018 Boeing Performance Excellence Award. The Boeing Company issues the award annually to recognize suppliers who have achieved superior performance. SIFCO is one of only very few performing suppliers to receive Gold Delivery/Gold Quality level recognition. This is the second consecutive year that SIFCO has proudly maintained this performance level. 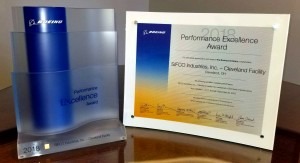 Cleveland Ohio, July 29, 2019 – SIFCO INDUSTRIES, INC. announced that its Italian facility in Maniago, Italy, also known as C BLADE S.p.a. (“C Blade”), has received an Excellence Award from Fuji Electric Co., Ltd.  This award is given by Fuji Electric to award its suppliers for their excellence in their continuous effort in supplying high quality products in accordance with a well-organized quality assurance system. SIFCO is dedicated to delivering excellence and this award is recognition of the hard work of everyone at the Maniago facility.

Cleveland Ohio, July 9, 2019 – SIFCO INDUSTRIES, INC. today announced that it has received a Forging Industry Association 2018 Occupational Injury and Illness Safety Award for the Greatest Improvement in size Group III. This Improvement Award is given in each group for the company experiencing the greatest improvement in the DART Incidence Rate. Award criteria is determined by percentage of improvement in DART Incidence Rate compared with the last three years average. SIFCO is dedicated to the safety of their workers and this award is recognition of the hard work of everyone in the Cleveland Forging operation. 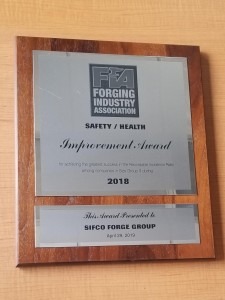