Results for the Third Quarter

Results for the Year to Date

CEO Peter W. Knapper stated, “The fire experienced at our Orange, California facility at the end of our first fiscal quarter 2019 continues to adversely impact our quarterly performance.  Excellent progress is being made on returning the site to full capacity, and we expect to have completed repairs by calendar year end.  We have entered a refurbished 2500 ton press into service, which returns us to full capability for our customers as we work to support their most urgent needs during the site rebuild.  We are making strides in working through the insurance recovery with our insurance provider, having collected $8.2 million in cash proceeds to date, of which $0.6 million was designated as business interruption coverage.

“We experienced a setback in our third quarter results, as a non-cash charge of $8.3 million was recorded due to a full write down of goodwill from one of the reporting units. Lastly, we experienced a delay in filing our third quarter results due to management working through a complex accounting matter, as such, requiring additional time in order to meet its financial reporting and disclosure obligations. The business as a whole continues focus on profitable growth, with firm backlog continuing to grow, previously at $94.1 million at the end of the second quarter 2019, now standing at $104.0 million at the end of the third quarter 2019.”

Use of Non-GAAP Financial Measures

The Company uses certain non-GAAP measures in this release. EBITDA and Adjusted EBITDA are non-GAAP financial measures and are intended to serve as supplements to results provided in accordance with accounting principles generally accepted in the United States. SIFCO Industries, Inc. believes that such information provides an additional measurement and consistent historical comparison of the Company’s performance. A reconciliation of the non-GAAP financial measures to the most directly comparable GAAP measures is available in this news release.

SIFCO Industries, Inc. is engaged in the production of forgings and machined components primarily for the aerospace and energy markets. The processes and services include forging, heat-treating, coating, and machining. 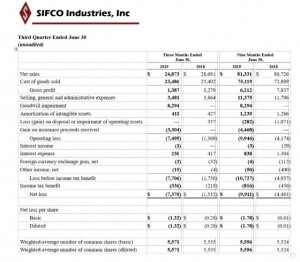 Neither EBITDA nor Adjusted EBITDA is a measurement of financial performance under generally accepted accounting principles in the United States of America (“GAAP”). The Company presents EBITDA and Adjusted EBITDA because management believes that they are useful indicators for evaluating operating performance and liquidity, including the Company’s ability to incur and service debt and it uses EBITDA to evaluate prospective acquisitions. Although the Company uses EBITDA and Adjusted EBITDA for the reasons noted above, the use of these non-GAAP financial measures as analytical tools has limitations. Therefore, reviewers of the Company’s financial information should not consider them in isolation, or as a substitute for analysis of the Company’s results of operations as reported in accordance with GAAP. Some of these limitations include:

Because of these limitations, EBITDA and Adjusted EBITDA should not be considered as measures of discretionary cash available to the Company to invest in the growth of its businesses. Management compensates for these limitations by not viewing EBITDA or Adjusted EBITDA in isolation and specifically by using other GAAP measures, such as net income (loss), net sales, and operating income (loss), to measure operating performance. Neither EBITDA nor Adjusted EBITDA is a measurement of financial performance under GAAP, and neither should be considered as an alternative to net loss or cash flow from operations determined in accordance with GAAP. The Company’s calculation of EBITDA and Adjusted EBITDA may not be comparable to the calculation of similarly titled measures reported by other companies.

The following table sets forth a reconciliation of net income to EBITDA and Adjusted EBITDA: